The Street I Live On

The street I live on is only two blocks long, lined with Victorian houses.  It’s in about the geographic center of San Francisco,  There are street trees and front yards (unusual for San Francisco) and in the spring it smells of Jasmine.  The neighbors are a mix of old-timers and gentry, gay and not, with lots of kids.  Across the street, three households have joined their backyards so the kids have more play space.

Every year there’s a block party and some of the guys on the block play in a band.  A neighbor supplies beer he makes in his garage.

We even have an e-newsletter.  We let each other know of the need for volunteers for the street fair, about our current crime wave, and referrals for tree trimmers or handymen.

Lately the big topic has been the street itself. The City recently dug up a trench to replace the century-old water pipes.  Then they graded and laid asphalt down half the surface. 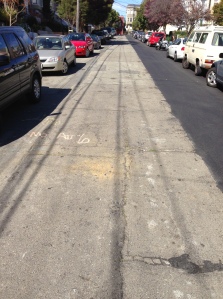 Some of the neighbors are upset that only half the street was repaved.

Our local representative wrote back that the other half will be paved. So maybe it’s temporary.

Honestly, in the 20 years I’ve lived on this block I never paid any attention to the surface of the street.  Until now. 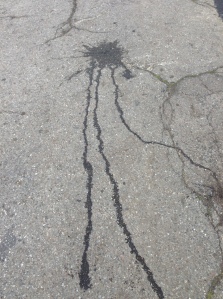 It’s got some great splats. 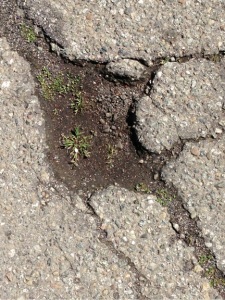 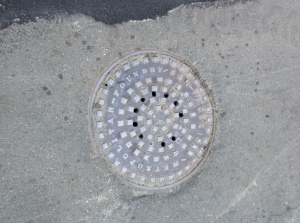 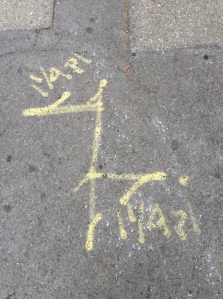 There is cryptic text. 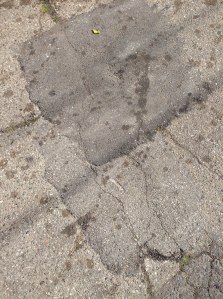 I love my street.  But this isn’t about the geography or the architecture or the landscaping or the people of my street.  It’s about the street: pitted, scarred, faded, pocked, scratched and patched.

And yours?  Take a look.