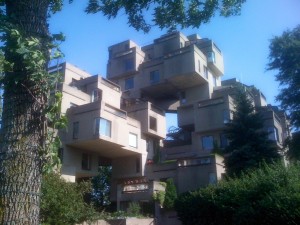 In the past year or so, I’ve been to Paris, Barcelona, New York, Montreal, and Buenos Aires. In two weeks, Chicago.

I’ll be posting impressions on upcoming posts.  For today, Habitat.

I’d first seen it at the time it was built, for the Expo 67 World’s Fair.  It turned out to be another example of World’s Fairs glimpses of a future that never came around.  Like something from Sleeper.  But it thrilled me at the time.

Now, not so much. On an island, separated from the City by industry and shipping, car-reliant. The critical mass originally planned to make it more of a self-contained community never happened.  A World Heritage Site, it sits isolated.