I enjoyed a few days in Medellin, Colombia, a city of about 2.5 million people that recently lost the title of “Most Dangerous City in the World”.   That’s what made me want to go there, to see what changed and how.  In the world of thinking about cities, the Medellin turnaround is famous.

Medellin saw an enormous population growth from the countryside, entire communities driven out by the decades-long warfare among the radical Revolutionary Forces of Colombia (FARC), paramilitaries, the Colombian army, drug traffickers – and their shifting alliances.  The United Nations estimates that 7 million people were displaced within Colombia – more than in Syria or Iraq or any other war zone.  Many of them set up “informal” communities on the mountain slopes surrounding Medellin. 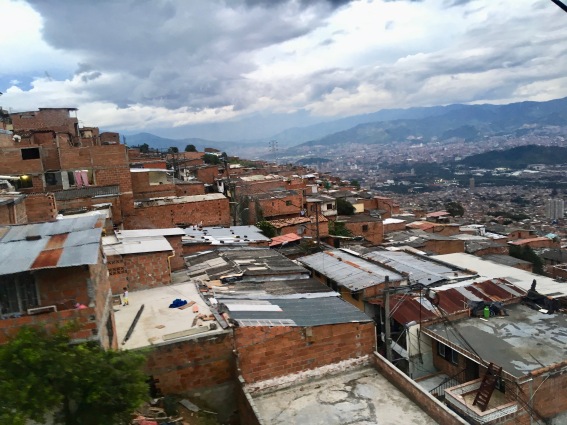 Because they were ad hoc, the City chose for decades not to legitimize them with public services like electricity, water, parks and recreation, and public safety.  Drug gangsters filled the void, even offering extra-legal land titles and developing and running soccer fields. And, for a price, protection. Only later did these communities receive public services.  In the neighborhood of Moravia, where residents had set up camp on and alongside the 90-foot high municipal garbage dump, resources now come from the Colombian government and from Spain and Germany, with leadership from residents, rather than City Hall. Because Moravia was so abject, dozens of international aid organizations have jumped in.

These mountainsides are mosaics of communities, entire villages that moved en masse bringing their social networks with them – even marching bands and boy scout troops. And they included men with real construction skills.  These aren’t shanty towns.  They’re funky and ad hoc but thoughtfully designed.

We walked through a couple of these communities: Moravia (formerly tagged the most dangerous neighborhood in the most dangerous city and once the domain of Pablo Escobar, drug lord and member of the Colombian Senate) and Santo Domingo Savio.

Santo Domingo Savio had had a 9 PM curfew but when we were there in the evening it could not have seemed safer.  The streets were teeming with people, including kids and older residents and the only two cops we saw were flirting with a girl selling sunglasses on the street.  Although we were with our friend Alejandro Echeverri, one of the heroes of the transformation, a kid of about 7 years old proudly offered to show us around and tell us the history of his neighborhood. Not only the houses are illegal but many of them had sprouted stores as well.  It felt safer after dark than our street in San Francisco,  which is typically empty except for occasional dog walkers and homeless drug addicts.

Medellin was an enormously dangerous city. Check out the murder rate:

No family was immune and it was not isolated to discrete slummy neighborhoods.  The last straw was the car bombings.

The shooting of Pablo Escobar, a painting by native son Fernando Botero

The people of Medellin had had enough and turned against the gangs. Medellin began investing in the barrios and integrating them into the rest of the city, most strikingly with a “Metrocable” system of cabins suspended from cables.  It’s a beautiful ride with 8-10 people in each cabin and super long lines at rush hour.  A fine solution to transit connecting mountainsides. And fun. 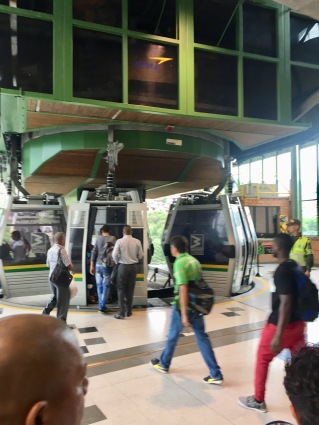 The City moved quickly and decisively to improve transit and education while roping residents into meaningful participation.  We heard that this involvement was key to the success of the turnaround.  Here’s how Alejandro describes it:

“‘We had a specific team that combined architects, urbanists, social workers, communications people, lawyers and a leader who was the “social manager” for that area of Santo Domingo. And that guy worked with the community keeping the project on the agenda,’ says Echeverri. ‘We also had imagination workshops every month, with children trying to think about how to make a park.”

Younger people in particular saw opportunities beyond the drug trade.  And the investments not only made space for education (with 5 libraries and 10 new schools launched in 2004) but also added to a sense of dignity.  Mayor Sergio Fajardo’s credo: “the most beautiful things for the humblest people”. The transit improvements weave the disenfranchised neighborhoods into the city and enable commutes to jobs outside the ghettos.

There is a lot of literature about “the Medellin Miracle” and like all talk of miracles it is hype. It’s great that the murder rate has plummeted (now to about half of Baltimore’s) but the city still has the big problems that any developing city does.  Traffic and pollution are awful.  And safer doesn’t mean safe, just better.  The infrastructure improvements came with social investments too – in education, arts, parks and a re-opened botanical garden. Medellin is lucky to have a municipal energy company, EPM, which contributes 25% of the City budget, part of the “miracle”. And the city added 2,000 police officers and armed them with state of the art technology.

Medellin was able to make big changes quickly because people were fed up. It  had hit bottom.  The City had to respond.  And it had the leadership and resources to do so.  Citizens participated and there was support from top to bottom, from elites and gang members as well.  The city really did turn around.

Here in San Francisco, we move slow.  For example, we debated for 16 years before devoting a lane of traffic on Van Ness Avenue to buses only.  Construction just began.  Maybe some day there will be a bus lane on Geary Street, a generation after that conversation started. Leaders dithered on the design of a new Bay Bridge and on whether to tear down the damaged freeways.  Nobody is very interested in speeding up public decision-making.  Rezoning takes a decade. And while San Francisco loves process, there is no meaningful public participation. Just ritual battles by the handful of regulars who show up.

Because San Francisco, for most people, despite gripes, works.  Crime and violence aren’t on any list of big problems (except for the petty crime of car break-ins).

Here, it’s hard to imagine the social impacts of widespread violence and corruption.  In Lima, I was told that in the 1990s it was dangerous to go to the corner store after dark and nobody could give or attend a party.  President Alberto Fujimori is credited with putting an end to the violence.  Even though he was convicted and imprisoned for murder, embezzlement, bribery, and forced sterilizations, every cab driver I asked missed him. And here we don’t have the corruption that is common in Latin America.  According to Ann Davis, founder of Venture with Impact, an aid group active in Medellin, Colombians say that 50% of tax dollars go to corruption and in Bogota 80%.  That’s the perception, the reality is that last year the estimated cost of corruption in Colombia was $17 billion, 5.3% of the GDP. 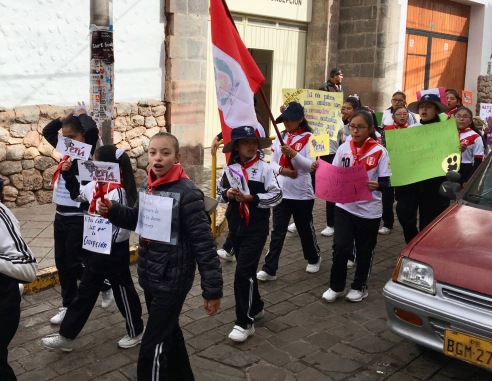 It’s nice in San Francisco. And there’s no urgency for change.  So the city dawdles along, poking at problems like affordability and crummy public schools and human casualties living on the streets.  It’s really expensive to live in San Francisco, so poverty moves to the suburbs.

There is something appealing about  “the worst”.  Look at the focus on Detroit, with its hipster influx and tourism.  But for every Detroit the US has dozens of cities with high unemployment, abandonment, and decay.  Ironically, Medellin benefitted from its terrible reputation as helpers and support rushed in from around the world. It’s chic.

And tourists.  In twenty years, tourist revenues increased by 700%.  Here is an opportunity to take the “Medellin Slum Tour”.  There is even a whole industry of tours on a Pablo Escobar theme, including some led by former associates.  There is a Pablo Escobar museum with, of course, a gift shop.

Escobar thrived in part because he ruled neighborhoods that the City had abdicated, providing even recreation facilities.  We saw a soccer field he’d donated that was the site of gang turf wars until the women leaders somehow convinced the rival gangs to play a match – dressed in drag.  Those must be super-persuasive women.

And I think he was aided by a culture that winks at the law.